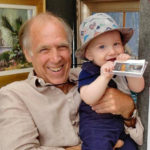 Jon’s training in art began as a child and continued through his studies at the University of South Carolina, the College of Charleston and finally the Leo Marchutz School of Painting and Drawing in Aix en Provence. It was in southern France while painting on location and studying the Impressionists that Jon developed his sense of light and color. The techniques Jon developed in southern France as a plein air painter are carried forward into his interior settings where he is able to capture that same sense of light.

Upon return from France, Jon settled in Boston. Not finding a teacher to study with, Jon continued to paint plein air and to copy the Masters to build upon his technique. He combined his understanding of the Impressionists with the Old Boston School and developed his own style: a loose realism with a hint of Impressionism. While living in Boston Jon painted cityscapes, seascapes, marinas as well as portraiture. He did many works for designers he and painted in many genres which hang in prominent establishments.

As Jon developed as an artist, his interest in painting people as the subject of his work led him to the museum setting. Jon became enthralled with the relationship of the people to the art work. He developed compositions encompassing the fine lines of the architecture of the museum building itself while also capturing the spontaneity of people enjoying the art work. He is known for his copies of the great Masters within his own work, doing his own renditions of such greats as Rembrandt, Monet, Degas and Sargent to name a few. But most of what Jon has become known for is the way that he is able to capture the very essence of people. Jon’s numerous’ collectors get a sense of warmth and familiarity with his work wherein Jon uses technique only to the point of getting his communication across with the painting.

Jon has traveled extensively in the U.S. and abroad, including New York, Chicago, Washington DC, Paris, London, Florence, Venice, and Madrid. Jon’s paintings reflect his travels and his passion for rendering the human form as an integral part of its environment.

Jon has received over 70 juried awards for his paintings, including :