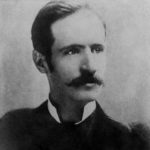 His work has a mysterious quality, which some associated with the type of music he habitually played on the piano during interludes from his painting. Towards the end of his career, his paintings became increasingly haunting, a reflection of his insanity brought on by horrible poverty and his inability to support his family of nine children.

He was both a late exponent of the Hudson River School of painting and also of the American West. He also foreshadowed the romantic, visionary, and modern tendencies that marked the turn of the 19th to 20th centuries. This romanticism, especially of escapism, was increasingly pronounced towards the end of his career.

Blakelock was the son of a prominent English-born, New York physician, and first took medical studies, but his love of music and art led him away from medicine. He graduated from the College of the City of New York, studied briefly at Cooper Union, and at the Free Academy of the City of New York. In 1867, he first exhibited at the National Academy of Design to which he was ultimately elected, after he was incarcerated for insanity. During this time, he painted a series of New York City scenes, primarily of un-glamorous areas such as his work, Shanties, New York City. He also painted in Hudson River Style and was in locations that included the Adirondacks and the White Mountain. It is thought he learned this style during his brief and only art education at Cooper Union.

Primarily self taught, he declined his father’s offer to pay for more extensive art schooling, and instead, at age 22, embarked on a three-year (1869-1972) horseback tour of the West. He lived with plains Indians, painting pictures of their villages, and traveled and painted through the Rockies and the Sierra Nevadas. In San Francisco and Oakland, he painted city scenes, the tree landscapes, and coastal views, and then he headed south to Mexico. These western paintings were also in the Hudson River style, although they were rough and more painterly.

Returning to New York, he developed what became his signature expression: quiet, moody, nocturnal scenes accented with bright colors depicting light, and trees silhouetted against the sky. He had a labor-intensive technique, which was building up of multi layers of thick paint, scraping some away, and “adding more to build a complex tonality”. (Zellman 420)

It is said that his real travels were introspective from which he created these moody, dark landscapes, and they did not satisfy the current public taste for uplifting Hudson River style painting. Ahead of popular taste, his work was overlooked, and crooked dealers took advantage of him. With the desperation of trying to support his huge family, he sold his work cheaply. Ironically, many years after his death, his work became so valuable that forgers, including a dealer who changed the signature on canvases of Blakelock’s artist daughter, Marian, to that of her father, sold paintings at very high prices by using his signature. Norman Geske, Director Emeritus of the Sheldon Memorial Art Gallery in Lincoln, Nebraska, became the authenticator of Blakelock’s work, and has seen many, many illegitimate so-called Blakelocks. Under Geske’s direction, a catalogue raisonne has been published that classifies paintings with Blakelock’s signature into three categories according to their degree of perceived authenticity.

In 1899, the artist had a mental breakdown and spent the last twenty years of his life in an asylum in Middleton, New York. He died on August 9, 1919. However, his work had already begun increasing in value, and by 1916 was bringing as high as $20,000.

Of Blakelock’s career, Norman Geske wrote: “Considered in the context of American landscape painting in the second half of the nineteenth century, Ralph Albert Blakelock can be seen first as a late exponent of the Hudson River School, second as a highly personal contributor to the painting of the American West, and third and most important, as part of the romantic, visionary, and modern tendencies that marked the turn of the century.”(16)