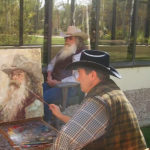 “Nikolo Balkanski’s paintings bring his European origin and training of his art, and his post-impressionist interpretations carry a distinctive quality that easily captivates the viewer with his portrayal of the subject using sophisticated color and remarkable draftsmanship”

Nikolo Balkanski began painting at a very early age and graduated from the Medium Special Arts School in Sofia, Bulgaria, when he was 18. At just 21, he held his first solo exhibition, “Time and People“, featuring portraits of some of the country’s leading actors, poets and politicians, organized by his father, who is an attorney, writer and poet.

This unique show garnered a lot of attention for the young artist, and he soon continued his studies at the art academy in Sofia, specializing in paintings. After moving to Finland with his parents, he studied at the University of Helsinki.

In 1981, Nikolo’s portraits of a variety of Finnish figures were exhibited in a show called ,”Finland in Portraits”, organized by the Finnish-Bulgarian Friendship Society with chairman Pekka Silvola, director of the Finnish radio. The show celebrated 1300 years of Bulgarian statehood. In 1983, Nikolo’s portraits were exhibited again, “Faces of Humanity” at the October Gallery in the United Kingdom. The London exhibition become the subject of a BBC documentary.

Upon seeng Nikolo Balkanski’s exhibition at the October Gallery in London, John Allen, art critic from United States described his work: “Alert a moment of being, engaged with a world that could dissolve to chaos but harmonized by attention …….. the portraits show individuals at a characteristic moment of meaning the fateful conjunction of type, personality and environment”.

In 1984 and again in 1985, Nikolo was invited to Colorado to paint and to exhibit his work, but he returned to his home in Finland. After his relocation to Evergreen, Colorado, in 1986, Nikolo began devoting more time to painting the western US landscape, although he continues to paint portraits, still lifes and figurative works to this day.

Over the years, Nikolo has been involved in countless solo and group exhibitions, including Artists of America, Great American Artists, Artists of the West, The Brinton 101, Oil Painters of America, Stampede Western Invitational, Buffalo Bill Art Show & Sale, The Russell Exhibition and Sale, Western Visions and others. His works are represented in private, corporate and museum collections.

“Of the many exceptional features Mr. Balkanski work displays, none is more commendable than his command of atmosphere. This is an elusive quality that all too many otherwise quite competent painters lack the virtuosity to achieve, Balkanski demonstrates an extraordinary understanding of light and depicts it in an altogether convincing fashion. The viewer senses at once the kind of light falling on Balkanski’s subject and is aware of the atmosphere, the weightiness of the space surrounding them.

This control of atmosphere gives each of his paintings a distinctive mood, an emotional quality independent of a narrative element and even the subject matter. The subtlety this kind of painting requires is a mark of uncommon facility and itself would qualify Nikolo Balkanski as a MASTER.”

“Unfettered by self-imposed limitations, Balkanski applies his well-developed skills to subjects as disparate as landscapes, nudes, portraits, still lives and more, His style, technique and especially his use of color result in images that are more painterly than the art that most collectors may be accustomed to seeing.” – U.S.ART

One sees at glance that Mr. Balkanski is schooled in the techniques of the old masters and possesses the exceptional talent to employ their methods in creating thoroughly modern paintings. It is therefore of no surprise that he is so highly regarded by his peers, museum curators and prominent art collectors”.

“His personal impressionist technique, rare lyricism and a sensitive acutely tuned to nature have produced a landscape painter equal to the portrait artist in Nikolo Balkanski”.