Lady in the Orange Scarf 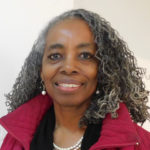