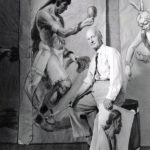 Born in Brooklyn, New York, Joseph Imhof was a self-taught lithographer for Currier and Ives in New York City and then became an important documentary painter of Indian life in New Mexico. He is best known for a series of sixty paintings focused on the importance of corn in the culture of the Pueblo Indians.

In 1891, he went to Europe for four years of formal training and apprenticed to artists in Paris, Brussels, Antwerp, and Munich. In Antwerp, he met and sketched Buffalo Bill and his Indians in the”Wild West Show,” which was making a grand tour of Europe. Ironically, it was this experience with Buffalo Bill in Europe that set the direction of his career rather than his exposure to European artists. However, lithography methods he learned in Europe had a life-long influence on his work.

Returning to the United States, he studied the Iroquois Indians in New York state and in Canada. Intending to return to Europe, he went East again but got sidetracked from these travels in New York City, where he spent ten years working on photography and color printing inventions. These innovations financed his early painting career.

In 1897, he married Sarah Stuart, and they returned to Europe several times and then in 1905 went to the Southwest for the first time to record ceremonies of Pueblo Indians. He built a studio in Albuquerque in 1906 and traveled throughout the region and then lived in New York before settling in Taos in 1929. He built his studio on the edge of the reservation facing the Sacred Mountain behind the Pueblo.

A highly private person, he was referred to by long-time resident and his twenty-year neighbor Mabel Dodge Luhan only as “the Grand Old Man of the Pueblos” (Samuels 244).

He collected many Indian artifacts and recorded ethnological information with his paintbrush. He had the first lithography press in Taos, making prints that are of ethnological value, and he also taught lithography.