Storm Over the Rockies 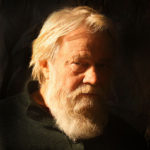