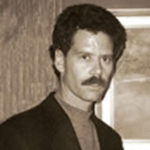 Robert (Bob) Crofut is active/lives in Massachusetts. Robert Crofut is known for illustrator, genre, portrait and Indian subject painting.
Bob Crofut was born and raised in the picture postcard New England town of Ridgefield, Connecticut where his family has lived for generations. Crofut, a 1974 fine arts graduate of Tufts University in Boston, describes his painting style as “soft focus realism.” Techniques he has developed to give images a half real, half remembered quality – almost dreamlike – have been the focus of articles in The Artist’s Magazine and other publications. Crofut also studied for four years at the Boston Museum of Fine Arts.

Before ever touching brush to canvas, Crofut goes through a process of meticulous research. He has been recognized for his exhaustive research and a unique ability to evoke the emotional atmosphere of the past, Crofut has appeared in such magazines as National Geographic, Time, Smithsonian, Reader’s Digest, American Heritage, and Yankee. Crofut describes his paintings as artistic time capsules transporting the viewer to a congenial, unhurried era far from the distractions of modern life: “When someone looks at my work, I want it to release him from the present and allow him to reminisce for a moment before returning to his daily activities refreshed and uplifted.”

Crofut also described a spiritual message that he tries to convey through his art – one of hope.
“I believe that we are not alone, that there is a positive force helping us,” Crofut said. “What makes a person willing to go through difficulties and struggles? Hopes and dreams. All of the best paintings I’ve ever seen have that optimism and so I try to convey it in my own work.”

Crofut admits to having been influenced by both N.C. and Andrew Wyeth, his son, as well as by the illustration work of Norman Rockwell. “I’m in love with America and how we’ve evolved,” Crofut said. “We are the greatest experiment on earth – One that has resulted in unprecedented invention, prosperity and free time. I want to paint it all – from pioneer and farm life, to the rise of the automobile and the airplane, to the invention of baseball.”