Timbers to the Tomboy Mine 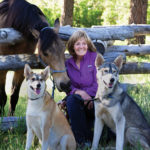