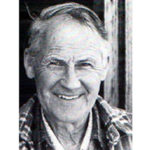 A well-known illustrators in New York City and then a painter of Western subjects, Tom Lovell paid great attention to details in his work and, because of this, seldom completed more than a dozen major oil paintings a year.

Lovell was born in New York City and attended high school in Nutley New Jersey. As valedictorian of his class, he spoke on the “Ill Treatment of the American Indian by the U.S. Government,” a harbinger of his depictions of the West. In 1931, he received a Bachelor of Fine Arts from Syracuse University in New York.

For thirty-nine years he was a freelance illustrator for many well-known magazines including Colliers, McCalls, and National Geographic. He was also known as a pulp illustrator, associated with “Dime Mystery” where his “ingenuity at picturing the bizarre instruments of torture dreamed up in the pulp writers’ imaginations was nothing short of remarkable”. (Haining 135).

In 1975, he and his wife moved to Santa Fe, New Mexico, and that same year, he was elected to the Cowboy Artists of America. Many of his paintings focus on historical western subjects such as relations between white men and Indians and early expeditions.