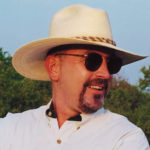 Born and raised in north-central Texas, George Hallmark was an architectural designer and commercial artist before turning to easel painting. Voted the official Texas State Artist in 1988, he has done work which can be found in many prestigious private and corporate collections, including those of Texas Instruments, the Texas Capital, MBNA, the Booth Western Art Museum, the Eiteljorg Museum, and the Capitol in Washington, D.C.

Hallmark’s work has been featured in Art of the West, Western Art Collector, Southwest Art, and U.S. Art magazines. He is an annual participant in the Prix de West Exhibition and Sale at the National Cowboy and Western Heritage Museum in Oklahoma City, and the Masters of the American West at the Autry National Center in Los Angeles.

George participates in the Eiteljorg Museum’s Quest for the West show in Indianapolis, where in 2010 he won the Artist of Distinction Award. Hallmark’s work is also featured in the West Select Show at the Phoenix Art Museum, where in 2011 he won the Silver medal for oil painting. In early 2012 the Briscoe Museum in San Antonio purchased a major painting for their permanent collection.

September 7, 2019, at the Quest for the West Show, at the Eiteljorg Museum in Indianapolis, Indiana, George was awarded the Harrison Eiteljorg Purchase Award.