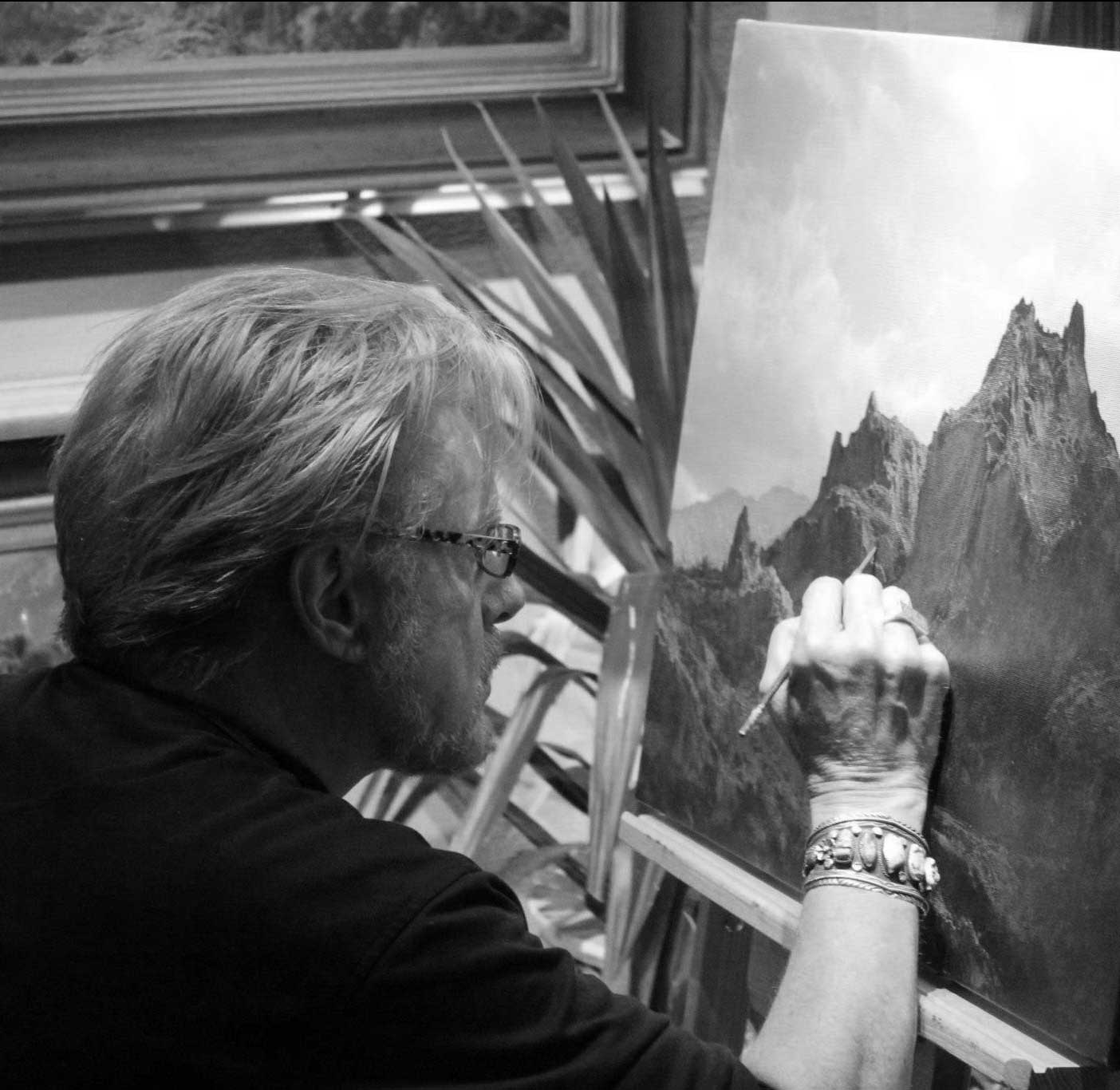 Dale Terbush was born in Elmhurst a suburb of Chicago. Soon thereafter his family moved to Southern California’s San Fernando Valley. As a young child he began what was to be his life calling-he began to paint. Such intuitiveness and burgeoning creativity early on provided him with a desire to excel and thus pursue his natural talents.
Getting to the point of painting exclusively has been a challenging, yet very insightful path for Terbush. Initially trying to find “A Real Job,” he was fortunate to find a career in design that kept him centered in a facet of the art world. Interior design of a large chain of restaurants allowed him to bring his talents to the awareness of the public. Painting a mural on a focal wall of a restaurant gained notice and praise by the restaurant’s president. Soon Terbush became head of the interior design department for the company and then worked his way to the position of Vice President. Success in the business world was achieved, so much so that Terbush has designed over 300 establishments. Once again the prolific artist rose to the top and achieved success in this artistic field.

Dale Terbush celebrates life by living in a constant state of creativity. He is an artist that thrives on productivity and sheer enthusiasm for his electrifying art. Terbush is a master at transforming a beautiful image into something that is purely spiritual and poetic. His art speaks for itself; elegant and mysterious, exciting and bold, Terbush paints a mood and creates a scene of mesmerizing magic.

Ever the enthusiast, Terbush found that life in the corporate world was lacking the outlet for his drive and desire to paint full time. So being and adventurer, he headed for Santa Fe, New Mexico in the early 1990’s to pursue his ultimate dream. Painting became his one true passion and propelled him in to the competitive art scene of Santa Fe. Terbush found his audience. In record speed the artist built a following of avid collectors and his dream soon became a reality.

Terbush captures a landscape that comes from within his own imagination. It flows from his sense of spirit and self. Terbush, a poet with paint, evokes the emotional response as in romantic prose. Each Terbush landscape is a unique dream world. Initially familiar, a closer look reveals a world of its own. The painting becomes an experience rather than merely a sensation. The romantic visions are often compared to the Hudson River School – the 19th Century body of artists who glorified nature, creating Eden-like scenes of lakes, rivers, mountains and other pastoral subjects. In his paintings intensity is found in the use of color and light. Terbush is a Master at illumination and the use of exciting, yet unexpected, color. Some have even compared his use of color to the 20th Century Master Maxfield Parrish.

Along with his dynamic painting, Terbush also now enjoys sharing with his collectors his romantic poetry and inspirational quotes. Terbush is the quintessential artist and poet; his inspiration and energy is passed on to all who experience this work. In 1994 he again picked up and moved to the art destination of Scottsdale, Arizona to further expand his market. Finding new horizons of inspiration and an even broader audience, Terbush continues to widen the scope of his work. Now with Remarqued Giclee on Canvas he has found another way of interpreting his work. All of the intensity and presence of a Terbush painting is showcased in his Giclees on Canvas.

Whether it is an original painting or remarkable reproduction, Terbush’s work is highly sought after all over the world. Collectors of his paintings range from Celestine Prophecy author James Redfield, Developer Donald Trump, Country Western singer Reba McIntire, Actor-Singer Terrence Howard, Actress Eva Longoria and International Heads of State – to name a few. Terbush has broken gallery records worldwide and has had four spectacular sell-out shows in Japan. His International acclaim rapidly continues to grow.

Terbush reveals beauty and emotion in his ethereal landscapes; each painting a poetic symbol of a powerful experience and a dream not to be forgotten. Terbush paints the Heavens but reveals the soul.