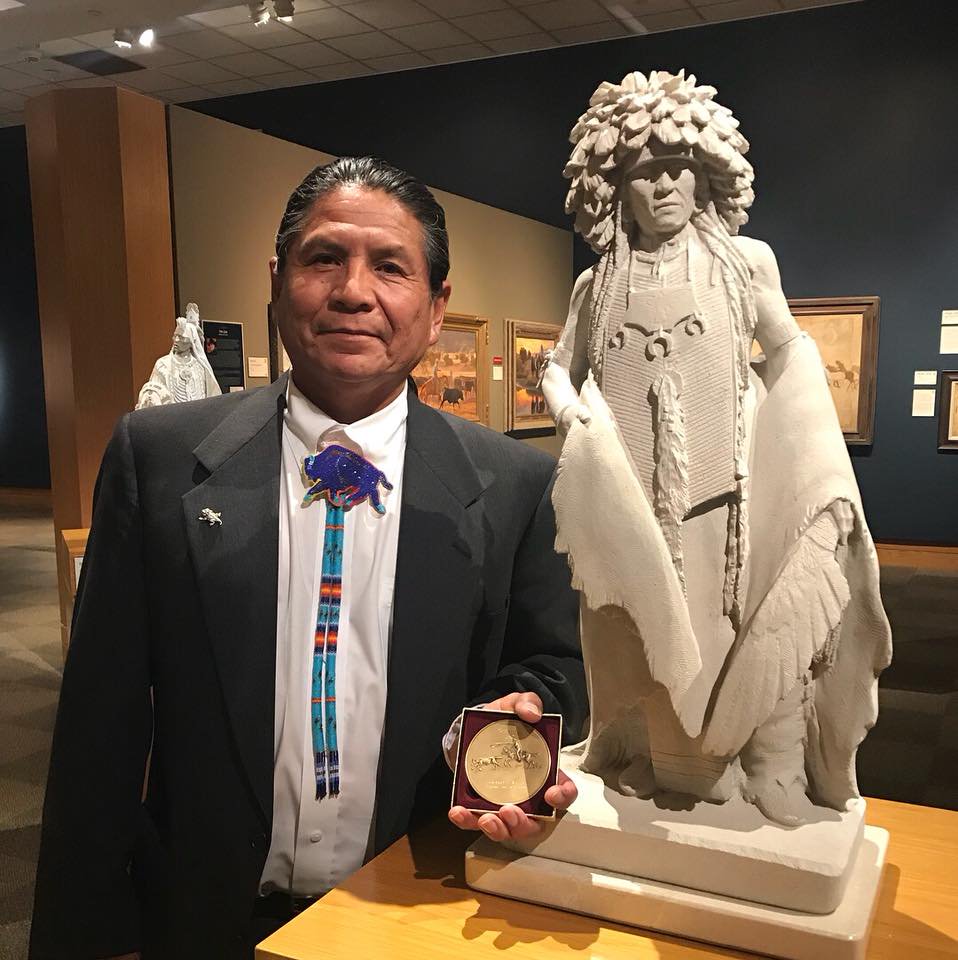 Oreland Joe’s rural upbringing on the Navajo Reservation in New Mexico was filled with family, open spaces and – surprisingly – art. A fourth generation artist, Joe’s mother’s family was blessed with musical talent and his father’s was gifted in the visual arts.

“Art is respected here,” says Joe, of the northwestern corner of New Mexico he has called home his entire life.

As a boy, he would watch his father paint with amazement and curiosity. His mother, quick to capitalize on his keen interest, would occupy her son for hours with a notebook and a magic marker. Joe shunned pencils and erasers.

“I learned to draw without using an eraser,” he remembers. “This helped me build confidence and self esteem. My own kids and grandkids learned the same way.”

It was during a sixth grade history project that Joe was introduced to sculpture. He created a clay-based figure of Confucius and learned that he enjoyed working the material with his hands. The same year, his school had an art show, and Joe wanted to prove himself and his talents. He sold two paintings and made seven dollars that night.

“By the time I was in high school I was selling thirty to forty dollars per week in sketches,” he says. “That was a real confidence builder.”

Joe’s high school art instructors recognized his talent and encouraged him. In class, he quickly finished his assignments and was allowed to explore different media, such as paper-mâché.

After graduation, Joe worked at a full-service gas station, participating in traditional hoop dancing on the side. His cousin, who was also part of the hoop dancing team, invited him to go to France with the group to perform. Joe had never traveled, and he jumped at the opportunity.

“My mom told me, ‘You might not get this chance again, so take it,’” he recalls.

In France, the hoop dancers performed by night, and by day Joe explored the rich museums and galleries of Paris and the surrounding areas. There, he was struck by the three-dimensional sculptures that he previously had seen only in books. He returned home inspired.

Because there was no stone available in his area until 1980, Joe’s high school art teacher introduced him to alabaster and gypsum. “I carved these with a kitchen knife and a screwdriver,” he describes. Joe sharpened his own knives and experimented in making his own tools. It wasn’t until a few years later when he received professional instruction in stone.

“I spent six weeks in Italy where I was first introduced to marble,” he says.

He learned to use traditional hand tools there, and when he returned home he began collecting implements. Today, though, he has pared it down to a small selection. “It really boils down to a few basic tools,” he says. “You don’t need all of that fancy stuff.”

Joe began selling his work at the Santa Fe Indian Market. From there, he moved to local, state and regional shows. He was always looking ahead to the next challenge. Later, he began applying to juried art shows.

It was at Settler’s West in Tucson that Joe met CAA member (now Emeritus) Howard Terpning. “I noticed that he took time to talk to this Indian he had never met before,” says Joe. At the same show, Joe met Carol Brown, wife of CAA member Harley Brown, who invited him to participate in a show. Little by little the invitations began coming, including the opportunity to join the Cowboy Artists of America in 1993.

“A lot of doors opened after that,” he says.

Today, countless awards later, Joe is a world-renowned, master sculptor. He lives in Kirtland, N.M., near the banks of the San Juan River not far from where he grew up. He has grown as an artist, and today his crafts include traditional jewelry making and music. But sculpture remains the mainstay of his work, and he has 25 tons of marble, limestone and alabaster in his studio to prove it. He continues to challenge himself as an artist and improve on his technique.

“I don’t think I will ever peak, and that is what keeps you humble,” he says. “I am always learning and open to new ideas.”