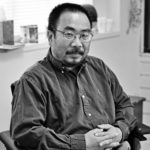 Born in 1961, Benjamin Wu studied art at the Guangzhou Fine Art Institute in China from 1978 to 1985. Upon completion of the oil painting program in the institute, he became a teacher at the Guangzhou Fine Art Institute. Although he’s honored to receive many compliments for his work, he realized, one must learn from the best to be the best. That’s when he decided to further his studies in the United States.

Benjamin Wu pursued his studies in painting and received his MFA degree from Academy of Art College in San Francisco in 1991. Since then, he worked as a freelance illustrator and continued to pursue fine art.

Benjamin Wu’s exquisite paintings have garnered many awards in exhibitions and competitions.

In 2006, he received the Merit Award for Portrait and Figurative from the Asian Art Exhibition in Tokyo.

Quickly following that, he received the Merit Award for his still life from Salon International 2007 in San Antonio, Texas.

In 2010, Benjamin Wu was the featured artist in the Nov/Dec’s issue of Art of the West magazine.

In 2011, Benjamin Wu won the Best in Show award at Scottsdale Salon of Fine Art at Legacy Gallery, Scottsdale, Arizona.

From 2011 to 2014, Benjamin Wu had been participated in The West Select Exhibition at Phoenix Art Museum.