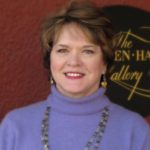 Wilkinson has enjoyed a lifelong love of animals which is now expressing itself in her sculpture. Working as a docent at the Houston Zoo, educating children about animals and conservation, provides her with inspiration and opportunities to observe animals. Animals often display the uninhibited playfulness of children and she tries to capture that in her work. She received her Bachelor of Science in Zoology from Oklahoma State University and served as a docent at the Houston Zoo for four years. She studied sculpture at The Glassell School of Art, Houston, the Fechin Institute and Scottsdale Artists School and naturally found that her love of sculpting combined with her love of animals became the focus of her work. Wilkinson has received numerous commissions to create likenesses of beloved animals and her work is widely collected by animal lovers across the country.