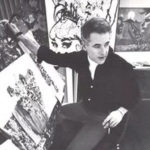 Robert “Bob” M. Peak (May 30, 1927 – August 1, 1992) was an American commercial illustrator best known for innovative design in the development of the modern movie poster.

His artwork has been on the cover of Time magazine, TV Guide, and Sports Illustrated. He also illustrated advertisements and U.S. postage stamps.

Bob Peak was born in Denver, Colorado and grew up in Kansas. He knew from an early age that he wanted to be a commercial illustrator. He majored in geology from Wichita State University and got a part time job in the art department of McCormick-Armstrong. After serving the military during the Korean War, Peak transferred to the Art Center College of Design in Los Angeles, California, graduating in 1951.

In 1953, Peak moved to New York City, landed an Old Hickory Whiskey ad campaign. His work went on to appear in major advertising and national magazines.

The United Artists movie studio hired Peak in 1961 to help promote West Side Story. Peak later illustrated posters for designer Bill Gold including My Fair Lady, and Camelot, as well as Rollerball (1975), the first six Star Trek films, Superman (1978), In Like Flint, and Apocalypse Now.

Peak received a commission from the U.S. Postal Service to design 30 stamps for the 1984 Summer Olympics in Los Angeles and the 1984 Winter Olympics in Sarajevo, Yugoslavia.

Peak also taught in his own college and later at Art Students League, New York and Famous Artists School.