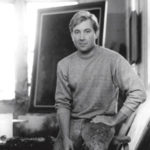 Richard Murray experimented with different painting styles and subject matter for twenty years before reaching the animal portraits he focuses on today. He attended the University of Utah during the Vietnam War, but his figural works and landscapes were dismissed as obsolete at the school. After joining the National Guard, he left the University to work in his studio. He struggled for many years working as an artist and then decided he wanted to paint animals in a new and unique way.

Murray has dedicated the last fifteen years to painting portrait-like images of wild and domestic animals, including cougars, longhorns, roosters, fawns, and others. The size of each work is determined by the size of the actual animal; many works span five to six feet. The artist paints the frame the same neutral color as the background, so nothing detracts from the projecting animal form. Using oil on panel, Murray employs vivid light and shadow in his portraits. He visits petting zoos and wildlife sanctuaries for research, and works from photographs taken at these locations during the low light at the end of the day.

“There’s an integrity about animals. . . A psychiatrist told me once that animals are safe, whereas people aren’t. I said ‘yes, but there’s also an attraction there. They’re not just a refuge from negativity; they’re positive. All their different anatomies and personalities, their movements and interactions, their characters. . . I find them eternally interesting.”