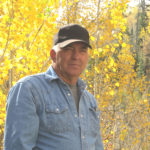 Lanny resides near the small Western Slope town of Silt, Colorado-not far from where he grew up on his father’s ranch in Peach Valley. Family camping & fishing trips that became sketching trips were early artistic efforts as Lanny developed a love for the high country of Colorado the West. Mostly self-taught, he began oil painting at the age of ten and developed as a fine artist through dedicated work and practice. Lanny met New Mexico artist Ben Turner in 1965 and was impressed with Turner’s ability to paint mountain landscapes. After high school Grant attended Adams State College in Alamosa, Colorado in 1971-1972 where he gained a knowledge of art history and studied life drawing.

During his study at Adams State, Grant made frequent trips to New Mexico, gaining an appreciation for the early master painters of the Taos and Santa Fe area. Grant studied portrait painting with Dallas artist Ramon Froman during the summers of 1972, 1973 and 1974 in Cloudcroft, New Mexico. Froman’s teaching concentrated on five solid fundamentals of painting: Observation, Drawing, Design, Values &amp; Color; Grant focused on these principles and has evolved his own style of painting from Nature. Other artists that influenced Lanny were Conrad Schwiering, and Greg McHuron- both dedicated plein air artists that lived in Jackson, Wyoming. Grant has devoted many years to plein air painting, resulting in his accurate translations of the many moods of the high country. Always drawn to remote and wild places, Grant continues to explore new areas to paint, including the vast Wind River Range in Wyoming and other areas of the West.