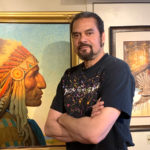 Thomas Blackshear went to work for the Hallmark Card Company in Kansas City, MO for one year after his 1977 graduation from the American Academy of Art in Chicago. While there, he met the famous illustrator Mark English and became his apprentice for several months. In 1980 he worked as head illustrator for Godbold/Richter Studio. He became a freelance illustrator in 1982 and has been self-employed ever since.