In the Morning Light 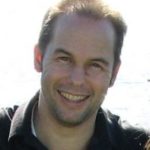 Bill has pursued his dream of creating beautiful art since he first stood at an easel at the age of five. He sold his first painting in a professional gallery while still in high school and has been working as a full-time artist for the last 17 years. To satisfy his love of teaching art he did diverge slightly to finish his MFA in painting in 2006. He continued to provide for his family with the sale of his paintings, but he felt that increasing his education would only enhance his opportunities to serve his collectors and galleries. He is forging creatively ahead and continues to enhance the beauty and naturalism in his work. He hopes you will feel peace and reassurance while you enjoy his work and experience a moment of the joy he felt while painting. As much as he thanks Heavenly Father daily for the gift of being an artist, his greatest joy is in his family. Kristie and their 7 children have supported and sustained him through every moment. Bill’s life is a dream fulfilled. He is constantly amazed with and wishes to thank the incredible people he has met and worked with as an artist.

Bill Inman grew up with an artist for a father and was therefore exposed to the art world at a young age. This exposure fostered an on-going thirst for knowledge on many levels. All aspects of a broad variety of visual medium have been skillfully studied, if not mastered: painting, printmaking, sculpture, illustration and graphic design, plus photography and art history. Bill has completed his studies toward a Master of Fine Arts degree in Painting. It is this quest for knowledge that synthesized his passion as a painter. Inman’s color and design sense were begun under Kesler Woodward at the University of Alaska. Intensive study in painting, drawing, illustration, color and design were continued under Leon Parson at Rick’s College in Rexburg, Idaho. But his most influential instructor at Rick’s College was Arlo Coles (a good friend of Sergei Bongart) who ignited a passion for French and Russian Impressionist imagery and techniques. These influences on the landscape artist helped him combine the French and Russian qualities and mold them with his own personal style of color and depth, pulling the viewer into the landscapes. Having started as an en plein air painter Inman soon realized his preference was for studio work producing paintings that do not have any photographic resemblance. Inman wants as little detail as possible to convey an image but wants to concentrate on each element in his paintings. His desire is for the viewer to experience the same original enthusiasm that he experienced upon his first encounter with the subject matter. Gardens burst with colors of stately hollyhocks and fragrant roses. They are just within reach for the viewer. Inman stops painting detail when he believes that he has achieved the naturalism and emotive response he is seeking. One’s eye completes the story started with brush and pigment. Bill Inman has exhibited consistently since 1983 when he was a Congressional Art Award recipient. This was a huge honor as only one artist from each state was selected for an exhibition that toured the Capital. In 1999 he was one of the featured artists in the Southwest Art Magazine “Artists to Watch” special section. He is in national and international collections too numerous to list.