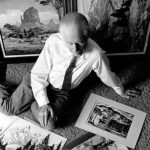 Three years after this time period, he and his wife Dorothy, moved to Denver, Colorado where he became the Head of the Art Department of Colorado Women’s College. He taught there for seventeen years. A few years after moving to Denver he became the daily hunting and fishing writer for the “Rocky Mountain News”. He also published a very popular art instructional book entitled “How To Paint Mountains”. In 1930 Wands discovered the painting community of Taos, New Mexico. He would spend the next eleven summers there. He became friends with, and painted with, many of the famous Taos artists of that period.

By 1943 he had become the Camp Artist at the YMCA of the Rockies, where he taught summer art classes. He later became the Chairman of their Religious Programs and Adult Advisory Committees. By 1947 he had quit his teaching position at the Colorado Woman’s College to devote full time to his painting. He was successful from the start. By 1955 he opened his own Studio and Gallery in Estes Park, Colorado. From the early 1950’s he could be found spending his winters painting along the California Coast, and in Mexico. He spent many winters during the 1950’s in Carmel, California painting images of the Monterey Peninsula.

In 1965, when the Rocky Mountain National Park was reclaiming park lands, Wands purchased the pro shop at Steads Ranch golf course and turned it into his studio and gallery. In 1995, along with his son Robert, he opened a gallery in downtown Estes Park.

Wands exhibited at the Cleveland Museum of Art, Cleveland School of Art, Denver Art Museum, Denver Artist’s Guild, Western Arts Association, Carmel Art Association, International Watercolor Annual Exhibition, Carnegie Institute in Pittsburgh, Chicago Art Institute, Pennsylvania Academy of Fine Arts, the Corcoran Gallery in Washington, and the Sangre De Cristo Art Center, to name a few. In 1939 he participated in the New York World’s Fair. He was an award winner in many of the venues in which his works were exhibited.

Alfred Wands died on October 27, 1998 in Sequim, Washington. Until his death, at the age of 94, he was active in the Olympic Camera Club and the Sequim Art Club.