The Mood of Mexico 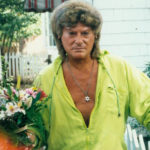 “The exhibition at the Colorado Springs Fine Arts Center (previously the Broadmoor Art Academy) today is the first one-man show to be given to him by an American Museum, but he has won prizes in national exhibitions in Museums in New York City, Tallahassee, Florida, Columbia, S.C., Oakland and San Francisco and the Colorado Springs Fine Arts Center.

He was picked by “Art in America” national art quarterly in its “new talent in America” competition in 1955, 2 years after he had been given a one-man show by the Artists Gallery in New York City. Raymond was born in Brooklyn in 1924. He studied at the Music and Art night school in New York and followed this with two years in the Army. In 1947 he turned seriously to the study of art, enrolling in the Art Student’s League in New York under Sternberg and Kantor. From 1951 to 1954 he studied at the Colorado Springs Fine Arts Center and since then has lived in Colorado Springs, painting and doing considerable work in stage design.”

In the initial phases of his artistic career, Mr. Raymond allied himself with the Abstract Style which was so dominant in the art world at that time, especially in New York City. He eventually moved away from that style into a mature Impressionistic Style whose subject matter consisted of gardens, landscapes, city and genre scenes. His work seems to dissolve into many colored dots as the viewer looks at his paintings up close. Mr. Raymond’s paintings are built on tonal values rather than on color. Mr. Raymond has stated that “Color is optional……I work more by values.” He has further stated that “Artists aren’t decorators.” A prominent art critic has stated that when looking at Mr. Raymond’s work one comes away with the sense of “a single artistic personality behind his painting”.

The American Federation of Fine Arts has voted Mr. Raymond as “One of the top fifteen Artists in the United States”. The Pikes Peak Art Council has recently awarded Mr. Raymond their “Lifetime Achievement Award”.

Mr. Raymond’s work is collected around the world, and is included in many prestigious private and public collections.