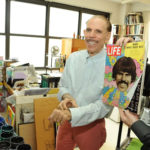 Peter Max is a multi-dimensional artist focused on contemporary events. When he left art school in the 1960s he began producing, “cosmic imagery . . . that caught on right away, and before you knew it, I got an eight-page cover story in Life magazine.” He explores all media, including mass media as a “canvas” for his creative expression.

His decorative designs are on a Boeing 777 Continental, Dale Earnhardt’s #3 Millennium race car, U.S. postage stamps and 235 U.S. border murals. He created two 155-foot murals for the U.S. Pavilion at the Seville World’s Fair in Spain, 12 postage stamps for the Earth Summit in Rio de Janeiro, Brazil, and a 600-foot stage mural for Woodstock 2. He has also painted for five U.S. presidents, as well as the Beatles, Aerosmith and the Rolling Stones.

After September 11th, 2001 Peter Max began a project by finishing 356 portraits of the firefighters that were lost in the attack. His portraits were then given to the victims’ families. In addition, from a special request from President George W. Bush, he recently created another 356 portraits for a firefighters’ memorial.

He loves to hear amazing facts about the universe and is as fascinated with numbers and mathematics as he is with visual phenomena.

Max’s early childhood impressions had a profound influence on his psyche, weaving the fabric that was to become the tapestry of his full creative expression. He recalls it as a childhood filled with magic and adventure.

European born, Peter Max was raised in Shanghai, China, where he spent his first ten years. He lived in a pagoda-style house situated amidst a Buddhist monastery, a Sikh temple and a Viennese cafe. And yet, with all that richness and diversity of culture, he still had a dream of an adventure yet to come in a far-off land called America.

From American comic books, radio broadcasts and cinema shows, young Max formed an impression of the land of Captain Marvel, Flash Gordon, swing jazz, swashbucklers, freedom and creativity. But the American adventure was far in the future.

At the age of ten, Max with his parents traveled across the vast expanse of China to a Tibetan mountain camp at the foothills of the Himalayas. Then they journeyed 9,000 feet up to a beautiful, white-turreted hotel in a mountain paradise that seemed like Shangri-La.

After their return to Shanghai, the family left on another voyage of discovery, around India, the continent of Africa, and Israel, where Max studied art with a Viennese “fauve” painter. It was in Israel that young Max also developed a love and fascination for astronomy.

In 1953, he and his family emigrated to America after a six-month visit to Paris. Though it was a relatively short stay, he enrolled in an art school and absorbed the culture and art heritage of Paris. At the age of sixteen, he realized his childhood vision and arrived in America.

After completing high school, he continued his art studies at The Art Students League, a renowned, traditional academy across from Carnegie Hall in Manhattan. There, he learned the rigid disciplines of Realism and developed into a realist painter.

When he left art school, Max had become fascinated with new trends in commercial illustration and graphic arts, from America as well as Europe and Japan. He decided to try his hand at it, and within a short time, he won awards for album covers and book jackets, which combined his own brand of realism with graphic art techniques.

Max also admired the work of contemporary photographers such as Bert Stern, Richard Avedon, and Irving Penn, which led to his photo collage period, in which he had captured the psychedelic era of the mid ’60s.

As the ’60s progressed, the photo collages gave way, to his “Cosmic ’60s” style, with its distinctive line work and bold color combinations. It became his signature style.

This new style developed as a spontaneous creative urge, following Max’s meeting with Swami Satchidananda, an Indian Yoga master who taught him meditation and the spiritual teachings of the East.

Max was suddenly on numerous magazine covers, including Life magazine, and appeared on national TV. Max’s visual impact on the ’60s has often been compared to the influence the Beatles had with their music.

In the 1970s, Max gave up his commercial pursuits and went into retreat to begin painting in earnest. He submersed himself in his art for several years, and was only induced to come out of retreat on occasion through special commissions by the Federal government agencies: the U.S. Border murals, the first 10 U.S. postage stamp, and projects for the Federal Energy Commission.

For July 4, 1976, Max created a special installation and art book, Peter Max Paints America, to commemorate America’s bicentennial. It was the year Max also began his annual July 4th tradition of painting the Statue of Liberty. In 1982, Max painted six Liberties on the White House lawn, and then personally helped to actualize the statue’s restoration, which was completed in 1986.

In the years that followed, Max developed his new atelier, with a primary focus on paintings, mixed media works and limited graphic editions. He was primarily focused on concerns of environmental, human and animal rights.

He began a series of works called Better World, and created a painting called I love the World, depicting an angel embracing the planet, inspired by his backstage experience at the Live Aid concert.

In 1989, for the 20th anniversary of Woodstock, Peter Max was asked to create world’s largest rock-and-roll stage for the Moscow Music Peace Festival. Soon after the festival, in October, 1989, he unveiled his 40 Gorbys, a colorful homage to Mikhail Gorbachev, then Premier of Russia.

Prophetically, a few weeks later, Communism fell in Eastern Europe, and Max was selected to receive a 7,000-pound section of the Berlin Wall, which was installed on the Aircraft Carrier U.S.S. Intrepid Museum. Using a hammer and chisel, Max carved a dove from within the stone and placed it on top of the wall to set it free.

In 1991, Max’s one-man retrospective show at the Hermitage Museum in St. Petersberg drew the largest turnout for any artist in Russian history. Over 14,500 people attended!

As a painter for four former U.S. Presidents (Carter, Ford, Bush and Reagan) in 1993, Max was approached by the inaugural committee to create posters for Bill Clinton’s inauguration. He was later invited to the White House to paint the signing of the Peace Accord.

Peter Max also directed his creative energy to important global events and has produced posters for many such events, including Summit of the Americas, Gorbachev’s State of the World Forum, and the United Nations Earth Summit, for which he had designed a series of twelve stamps that became the best-selling stamps in U.N. history. For the U.N.’s 50th anniversary, Max produced an installation of fifty paintings in different color combinations of the landmark United Nations Building.

A lover of music, Max has been designated Official Artist for the Grammys, The 25th Anniversary of the New Orleans Jazz Festival, and the Woodstock Music Festival.

In the sports arena, Max has been the Official Artist for five Super Bowls, The World Cup USA, The U.S. Tennis Open and the NHL All-Star Game.

Always an optimist, Max sees a fabulous new age for the new millennium, filled with enormous possibilities. He also sees a need for a greater responsibility to our planet, and he is ever ready to serve as the “Global Artist.”