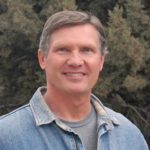 Robert Peters was raised in Phoenix, Arizona and spent much of his youth exploring the mountains and deserts of the Southwest. He received his formal art education at Northern Arizona University and Arizona State University. After completing his studies, Peters became a freelance illustrator, and his work appeared on the covers of national magazines including U.S. News and World Report. Among his client list are corporate giants IBM and AT&T. The work of Robert Peters has regularly appeared at the Society of Illustrators annual juried exhibitions in New York City.

After twelve years in illustration, Peters determined to make a career of fine art and began to paint landscapes full time. He now exhibits at the Autry Museum’s Masters of the American West in Los Angeles, and at the National Museum of Wildlife Art in Jackson, Wyoming. He has been selected to exhibit in the Bennington Center for the Arts’ Artists for the New Century exhibition in Bennington, Vermont. His work has been the subject of feature articles in several publications including Art of the West, Wildlife Art, Informart, The Equine Image, Western Art Collector, and Western Horseman. His work is displayed in many notable corporate and private collections. Peters lives and works in a country setting just outside of Prescott, Arizona with his wife, two children, and their dogs and horses.