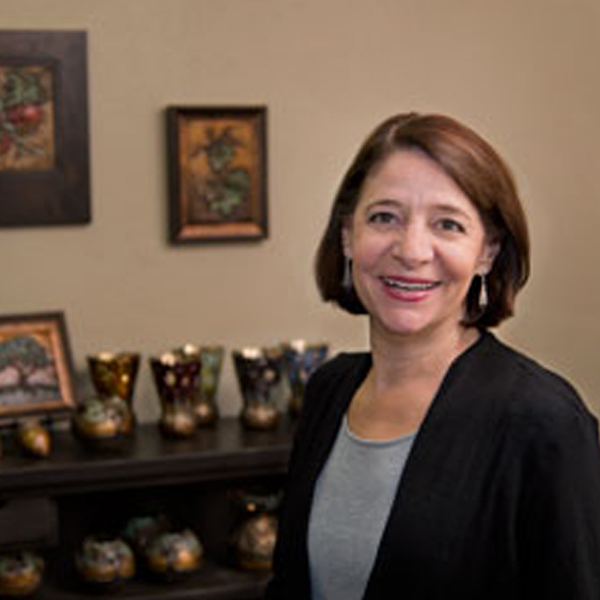 Carol Alleman began her sculptural artistic visions in clay and later expanded to include the lost wax casting in bronze. Fifteen years later, she continues to passionately embrace the alchemistic nature of this ageless material and highly crafted process while working primarily in bronze. Her first bronze vessel, “Miracles,” marked her transition into this new medium; and thus began the mystical and organic Tree of Life and Nature Vessel Series. This transition mirrored, to her, the longevity and ever changing character of nature as the bronze material holds inherent longevity characteristics and the patinas are ever, even if softly, always changing – not unlike the seasons themselves and the seasons of ones life. Her signature, museum-quality work encompasses highly evolved, intricate patinas and vast cut-out areas each within the ancient vessel form. The essence of infinity symbolic to the circular vessel form, while open to both receive and pour forth, is a powerful essence for her. Companion Writings accompany each bronze – sharing the inspiration of each piece as she received it and typically includes a poem. The inspiration she shares invites the viewer/reader to deeply and genuinely consider one aspect or another of the incessantly wise Voice of Nature. She hopes and expects each piece to continue to speak to its caretaker, with a changing voice within each new season of their life – the writing intended as a seed which will continue to grow. Combining the written word with her growing forest of bronze vessels, Carol additionally inspires audiences through her presentations and poetry readings.

Born in rural Pennsylvania, Carol Alleman obtained her degree in Art Education from the Pennsylvania State University (PA/USA) and continued graduate studies at the Lancaster Theological Seminary (PA/USA). Most recently, she has completed studies with various contemporary artists at the Scottsdale Artist School, Scottsdale, Arizona. She is an elected Signature Member of American Women Artists, a member of Allied Artists of America, and a member of the International Artists for Conservation. She has completed numerous commissions and exhibits widely across North America including many museums and has earned awards in many juried shows while appreciating an international collector base.