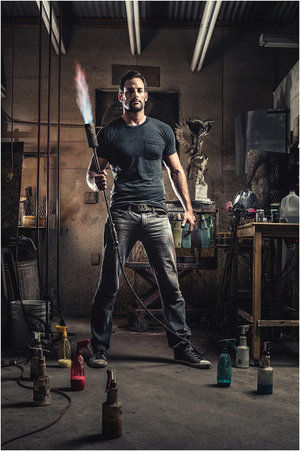 Though Erik Petersen is only just beginning to understand his power as a contemporary wildlife sculptor, he has been captivated by art since he was a child growing up in Lompoc, California. He started drawing and painting at an early age. In 1996, he went to work for a bronze sculpture foundry in Prescott, Arizona, where he currently resides. Through his work at the foundry, Erik became immersed in the world of art and artists. “I think anyone participating in creativity is an artist,” says Erik, “and all it takes to be an artist is to think you are one.”
For seven of the nine years that Erik worked at the foundry, he specialized in developing his skill and ability as a patina artist. In 2005, he opened his own business doing finishing and patina work for many prominent western artists. He began developing his own sculptures at that time, focusing on the wildlife that inspires him daily.

Erik’s sculptures and those of his clients have been featured in Southwest Art, Western Art Collector, Cowboys and Indians, Sedona Monthly, and The Arizona Republic. In 2014, in collaboration with his cousin, Willie Petersen, Erik orchestrated a popular art exhibition titled Inspiration to Creation: The Hidden Life Behind Bronze. The show, which featured photography, sculpture, and film, premiered at Desert Caballeros Western Museum in Wickenburg, Arizona. It traveled to the Phippen Museum in Prescott in 2016.