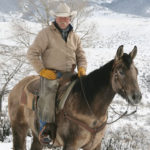 Devenyns was born with the talent to visualize and create. However, his direction did not merge with his talent until an automobile accident allowed him the opportunity to focus on his God given ability. During a nine month recuperation period in 1974, the artist began unfolding and discovering the layers of his creativity. Steve’s bareback and saddlebronc riding, as well as his pre-veterinary studies at CSU were put aside and the pursuit of his artistic talent began. It continues today. His dedication to quality and perfection has lead to a successful career as a self-taught artist. His work today is a reflection of the input and friendship of several well known artists that have helped and supported Steve throughout his career. Ray Swanson, Robert Tommey, Jim Wilcox, Tucker Smith and John Kittelson have all had a tremendous influence in Steve’s work.

Raised in Colorado, Devenyns has always enjoyed wildlife, the west and open spaces. As a boy, his love for livestock and horses put him in a saddle or near a rodeo. The lifestyle Steve enjoys today that takes him to the places that he paints. He is a horseman and outdoorsman that enjoys time in the mountains or with rancher friends working livestock. Devenyns is selective of the West that he paints. His story of the West is told in episodes that reveal moments he knows to be true from personal experience. “I prefer to paint the cowboys of today, the ones I’ve worked with on horseback. Their work isn’t always glamorous, but they are fortunate in so many ways. It’s a life they love, and you can’t pry them out of the saddle. I want to capture on canvas what they feel and see, as well as their independence and dedication.” No extravagant, wreck a minute, action-packed scenes, but simple, pure stories are found in a Devenyns painting. One reason he paints contemporary life is to prove that the openness and the chance for freedom still exists … if you want it bad enough.

Life in Cody, Wyoming:
Steve Devenyns lives with his wife, Karen, on the Southfork of the Shoshone River near Cody, Wyoming. He continues to pursue his fine art carrier.