A Pair of Ruby Throats in Yellow with Many Shapes 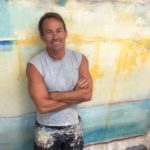