Equilibrium in Cream and Green 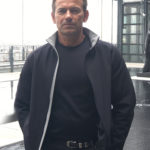 DIMENSIONAL LAYERS
Dimensional Layers is an evolution of my Parallel Layers paintings. They are both painting and sculpture, they reveal and build at the same time. They animate walls with dimension, texture, color, and shadow and the free standing towers bring life-sized energy to a room. My comfort zone is painting, my passion is sculpture. Thinking three-dimensionally and the physical aspect of making sculpture fulfills my ever insatiable desire to work with my hands to create something new and original. Life builds on itself. It has been more than 20 years since I last showed 3d work in galleries. That work evolved into public art sculptures that are now in permanent collections in cities nation wide. As a young child artist I assembled old and new discarded items into an objects worth keeping. Dimensional Layers builds on that concept by using old discarded wood from dilapidated barns and buildings, weathered by sun and wind, unearthed from the sands of southern Utah. That aged material mixed with the right amount of new generates a metamorphosis of materials each complementing the other into a concise sculpture.

PARALLEL LAYERS
These paintings are non-verbal thoughts of my environmental experiences from cities, mountains, and deserts. The places I have lived influence my work. From the soaring skyscrapers in New York City to the expansive groves of aspen trees in the mountains of Colorado to the dynamic red rock cliffs in the deserts of southern Utah. There is an aesthetically pleasing fractal pattern that unites these environmental locations as well as this body of work. The power of the repeating chaotic vertical patterns in nature share a similarity with controlled architecture elements of buildings reaching to the sky in cities. This series of paintings does two things simultaneously. First, they draw on the infinite complex fractal patterns to make a visually stimulating painting. At the same time, the various degrees of self-similarity is aesthetically pleasing, calming, and possess a stress-reducing effect on the viewer.