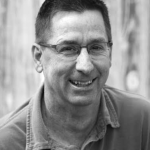 Michael was recruited by Hallmark straight from Utah State University where he received a Master of Fine Arts Degree. During his college years he took many courses in technical drafting learning much about line drawings, shading, and three-dimensional renderings. This training has had a major effect on the way Michael paints. It has trained him to see detail and strive for accuracy.

Michael was raised in Bountiful, Utah where he explored the rural landscape with his friends and family. He was encouraged by both his Mother and Grandmother to work with his art rather than follow the family occupation of mechanical engineering. Michael’s dream was sports but for some reason he always carried a camera with him.

While participating as a Mormon missionary in Thailand he carried a sketch pad with him and he became more and more interested in pursuing a career in art. Michael, still not sure of his career desires discussed his love of the arts with his wife, Lynda, who encouraged him to pursue his interest. Michael transferred to the Utah State University at Logan to delve into his interest in the fine arts.

This immersion in painting was a huge boost in his abilities and desire to paint.

After graduation, Michael was offered a position with Hallmark and was moved to Kansas City. During his employment with Hallmark he was in a unique position where he was allowed to use his experience as a landscape and figure painter to do specialty cards for the masculine line of cards.

Michael mixes what he sees and what he wants to see in developing his paintings. He may add a stream, a mountain, or waterfall to achieve the feeling he wants for his painting. Sometimes he will work some low mountains into the background just to give something for the colors to contrast against.

Michael is fascinated by landscapes but also loves painting figures. Especially when those figures are of his family and loved ones. While in school Michael did a lot of figure work with models but now tries to paint figures at least once a week, mostly his children. When doing figures he only paints those he loves. Michael is very close to his family. While doing a workshop in Texas, at night he would practice a magic trick just to be able to show it to his children when he returned. When he has to be away to paint or teach his family is always on his mind.

Meeting with others who are interested in art gives Michael a lift. Whether it is an art buyer, an art dealer, or an art student he enjoys sharing the creation of a painting or just discussing the process. Michael is thankful for a wonderful family and those that buy his paintings.