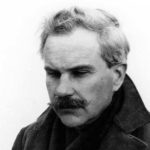 Daniel Stookey Lutz was born in Decatur, Illinois on July 7, 1906 to Florence Stookey and Samuel Milton Lutz, who owned a music store in Decatur. The muses were plentiful in the young artist’s life: his father was a noted violinist and his mother a fine watercolorist and occasional painter. He was aware of his passion for art at an early age. He came of age in the Roaring 20s but he matured, as the country did, under the pressures of the Great Depression. He was twenty-three when the stock market fell in the fall of 1929. Fortunately for Lutz, he had already commenced his studies at Art Institute of Chicago (AIC) when the panic of Black Thursday occurred.

After four years of studies at the AIC, Dan Lutz received the James Nelson Raymond Traveling Fellowship in 1931. This allowed the young artist a full year of travel in Europe, primarily in France. Very few, if any, paintings have survived from either his student days or from this early European travel. In the fall of 1932 Lutz returned to Chicago where he married Dorothy Best, with whom he would spend the rest of his life. Later that year Lutz came to Los Angeles, California. He finished his formal training at the University of Southern California (USC) and received a Bachelor in Fine Arts degree.

For the next forty years Lutz would make his way in life as a professional artist. His work received local and national recognition and he was beginning to be noticed in Europe when he suffered a stroke and was forced to retire. He had numerous one-person exhibitions, received awards and was recognized as one of California’s leading lights in the artistic community. As the exclusive representative of the artist’s estate Sullivan Goss is proud to offer works from every era of the artist’s career in nearly all media: oil, acrylic, watercolor, and pen and ink