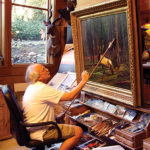 Coleman quickly became a prominent Southwestern artist when in 1978, at the age of 32, he was given his first retrospective at the Buffalo Bill Historical Center. He exhibited at the National Academy of Western Art and at Kennedy Galleries in New York. Then, in 1999, he won the Prix de West Award at the National Cowboy Hall of Fame for his bronze of a moose titled “September”, which work has joined the permanent collection of the Hall of Fame.