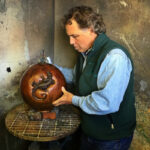 Dave LaMure Jr. lives in the Magic Valley of Idaho where the Great Basin meets the southern cliffs of the Snake River. Dave has worked with clay since he was twelve years old. Since that time, he has developed an art uniquely his own from monumental public bronze sculptures to large oil canvases. Dave’s innovative style of sculpting vessels is new to the world of clay and bronze. Proof that Sofia Loren awarded him best of show and a kiss, that is a high honor. The fine art of bas-relief, size and detail of each piece is unknown before. Look for a manifestation of feeling, heart, form, movement, composition and value.

LaMure has mastered his fine art with innovative techniques seeing the unseen. James Woods, director of the Herrett Museum and Center for Arts. Says “David has managed to successfully mix the warmth and softness of the technique with a contemporary concern for bold forms. LaMure’s forms are huge, dynamic and commanding.” Combining art forms together has taken years of trial and error, and has given Dave’s pieces the identity of art on the cutting edge.

Dave’s creative enthusiasm is the narrative of the symbiotic relationship between his work and the way it is altered, like all living things and the earth. His inspiration is tethered by being an avid outdoorsman and a wilderness river guide. Dave has the courage to explore art and narratives of the natural rhythms of life, death and belonging. Dave was inducted into the Society of Animal Artists and is passionate about their mission to promote excellence in the portrayal of domesticated and wild animals in art.