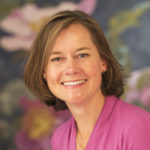 “The Western experience is one of contradictions as we navigate between modern progress and pure wildness. Geographically rooted in the West, I intend to bridge the gap between traditional and contemporary. Using the classical approach, I apply the tools that have been tried and tested through the centuries; patterns of light and dark, color theories, and techniques to create illusions of space. However, I find the modern approach to lend the freedom I need to express the intuitive sense of place; color fields, expressive mark layering, and textures that unite the painted surface. I honor the infinite beauty of this land, while striving to lend a relevant voice in these modern times.”

Chula Beauregard is an award-winning artist, born and raised in the mountains of Colorado. After graduating cum laude as a Studio Art major from Whitman College, she served for two years in Gabon, Central Africa as a Peace Corps volunteer. Later, she earned her Master’s in Education to teach Fine Art. In 2008, she began her professional painting career, studying with master landscape painter Skip Whitcomb. Her work has been featured several years in the American Impressionist Society Annual Juried National Exhibition. In 2020 Chula participated in the American Women Artists National Exhibit, GA, where she won the Fine Art Connoisseur Award. When she is not in her studio, in Steamboat Springs, CO, she can be found wandering the West with her family of two boys and adventure-loving husband.