Spring Time in the Rockies 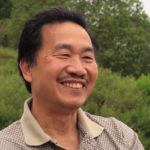 Born in Southern China, Mian Situ received his formal art training in his native homeland of Guangdong, formerly Canton. He graduated with a Bachelor of Fine Arts from the Guangzhou Institute of Fine Art, and a few years later earned a Masters in Fine Art. Mian’s paintings clearly reflect his upbringing in the rural countryside of his native China.

His deep-toned impressionistic paintings of the backcountry often focus on people going about their daily lives in their small villages and farming communities. Mian’s artistic versatility is also evident in his exquisite portraiture, as well as his more recent works inspired by western historical themes and American landscapes. Since 1995, he has been recognized with many national art awards.

During the 2003 Masters of the American West show at the Gene Autry Museum, he was honored with three major awards: the Thomas Moran Memorial Award (in recognition of exceptional artistic merit), Artists’ Choice Award and Patrons’ Choice Award. He has also won the Award for Excellence for Master Signature Members for his painting, “Helpful Hand”.